Working for a while on the railroads of America, Casca eventually sails from San Francisco out into the Pacific and ends up on a South Sea island where he joins with the main village in fighting the expansionist designs of the local area warlord. After defeating him Casca sets sail into the vast ocean alone.

Tossed onto the Californian coast after a storm Casca makes a living as a bouncer in the saloons of the frontier, and then gets involved in a mission of revenge. Heading into the wilderness he signs up as an army trooper. Commanded by Custer, Casca is part of the Seventh Cavalry that are wiped out at the Little BigHorn. Casca comes round as the only survivor and walks off into obscurity.

Finally destitute again, in order to earn money he rejoins the US Army and takes part in the fighting on Cuba in the war against Spain. After victory Casca sails for the far east and Hong Kong. 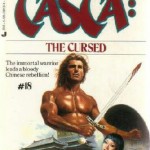 Joining the British army in Hong Kong Casca is sentenced to death for executing a lieutenant in an act of revenge. Spared in return for becoming a spy for the governor, he’s sent to China but is captured. Deciding to join the Chinese, he leads one of the Chinese armies in the Boxer Rebellion, attacking the legation at Tsungkow. However he is betrayed and ends up losing everything. Oddly, he’s rescued by the Brotherhood of the Lamb.

After serving the Chinese government for a while, Casca has to flee to London after being recognised as a murderer (see above). One of the many homeless in London, Casca finds money and travels to South Wales and works in the coal mines. When war breaks out he signs up and is sent to Flanders as part of the B.E.F., fighting at Mons and on the Marne. Eventually he is burned and left for dead, but the ship he’s on is sunk and he’s picked up by a troopship bound for Gallipoli.

Casca comes to in an Alexandria hospital, but a medical orderly is suspicious of his healing powers. Escaping by crashing an ambulance, Casca is hunted by the British as two soldiers died in the accident. Casca joins the Australian army to flee Egypt and becomes part of the campaign in Gallipoli to fight the Turks, but the medical orderly closes in on him. After becoming romantically involved with a young nurse, Casca escapes Gallipoli and ends up in Bulgaria, walking away from the horrors of trench warfare.

Despite trying to flee the horrors of World War One, Casca ends up in Romania just as they enter the war and is caught up in the disaster that overtakes the country. Retreating into Russia, Casca is engulfed in the revolution there and initially joins the communists until the truth of what they do hits him.  He then escapes the clutches of the Communists.

After the horrors of the Russian Civil War he makes his way to Spain where civil war looms and he takes the anti-communist side. After victory there he travels to Nazi Germany where their anti-communist stance draws him into their armed forces just as another war breaks out.